This gown was created as a gift for a friend, whose persona is a 12th Century noblewoman of the Aquitaine court. It was designed after extant illuminations and statues, my analysis of which was heavily informed by Eunice Goddard’s 1927 Doctoral thesis, Women’s Costume in French Texts of the Eleventh and Twelfth Centuries. Goddard’s publication represents a study of extant literary sources from this time period, and analysis of the descriptions of clothing therein.

The main material of the gown is 100% shot-silk taffeta, in red and gold. Shot-silk taffeta was well known to Western Europeans of the 12th Century, and indeed was used as early as the 7th Century by Anglo-Saxons, as indicated in the account of the translation of St. Cuthbert’s remains in 1104 at Durham, written circa 1170 by Reginald of Durham (Anglo-Saxon Art: A New Perspective, C.R. Dodwell). I chose the colors red and gold for this garment as they are together the livery colors of the recipient (gules and Or), and because the overall appearance of a soft, dusty pink when the colors are combined is flattering to her complexion. 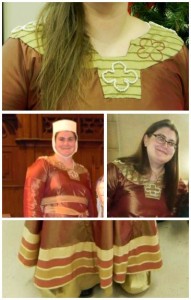 For the hemline of the gown at ankle and wrists, I added decorative banding in contrast fabric. These bands are cut from a synthetic silk which has a striped pattern of pale gold, dark gold and dusty pink, complementing the shot-silk. This was done as a nod towards the use of orfrois bands to edge hems and cover seams in 12th Century clothing, as discussed in Goddard: “Orfrois appeared as bands of embroidery in which gold thread predominated, and also as lengths of material woven or embroidered with gold thread… It was also used as a trimming… especially on garments.” Goddard goes on to reference “illustrations of orfrois as stiff bands of embroidery which are found in abundance in the borders of the garments of many statues.” 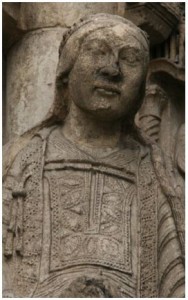 The neckline of my gown features a wide yoke in a pale gold synthetic fiber, embroidered with cotton thread and couched with real pearls in a quatrefoil motif. On the subject of decorative yokes, Goddard writes: “[t]he cheveçaille as the collar of the dress embroidered with gold… or set with jewels… is frequently shown in the iconography, In fact the heavily embroidered band at the neck laid on flat, … is one of the distinguishing characteristics of the twelfth century… This flat collar may be cut square, round, or in a V, and often extended down the front of the dress.” The patterning and construction of the yoke, along with the quatrefoil design which appears on it, were my own invention based on extant art. However, the embroidery and couching were executed by THL Cecilia Lightfoot, as her contribution to this gift.

Finally, the gown has a matching belt, which was constructed from the same striped synthetic silk used at the hemline. This belt is fully reversible, with gold on one side and dusty red/pink on the other, so that it can be worn with other garments if desired. Goddard writes, “The ceinture is a belt worn with the dress. The elaborate and costly belts worn at this period have been described at length in the histories of costume… From the texts we have further evidence as to the materials, which were of silk, or similar fabrics embroidered in gold… The illustrations show that the lady’s belt was often wound twice around the waist and then tied in a loose knot.”