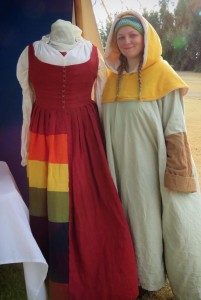 My 16th C Swiss gown was created as an entry for Caid’s Queen’s Arts & Sciences Champion competition, held in January AS L (2016) during the reign of A’isha II, 76th Queen of Caid. The theme for the day was ‘The Middle Ages as they Should Have Been.’

I was honored to be named winner of the competition and asked to serve as Her Majesty A’isha’s Arts & Sciences Champion for the duration of her reign. Below is presented my documentation as it appeared that day. 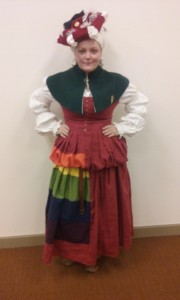 This gown is an original design based on elements of various Swiss and German gowns from the early 16th Century. While representative of the basic style of dress worn by middle class women throughout German speaking regions during this time period, my gown features flamboyant use of brightly contrasting colored bands (guards) as are commonly associated with ‘Trossfrau,’ or ‘Kampfrau,’ the female camp followers of ‘Landsknecht’ mercenaries active throughout the 16th Century in Continental Europe. 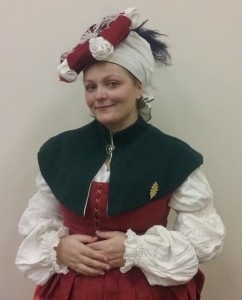 Gowns from this period and setting were typically constructed of wool, usually lined in the same or lined in linen. Linen would have been used for an undergown and for the smock, but not typically for an overdress. Due to the climate of the region I reside in, I chose to construct my over gown from 100% linen cloth, to prevent overheating. Please note that the entry is the linen gown itself – the white linen smock and other accessories are shown for display purposes only and were not made by the entrant.

This entry is intended as a period garment that displays LGBTQ Pride, as a representation of the theme ‘The Middle Ages as they Should Have Been.’ In the SCA, we are able to share our support for the queer community as allies, and be open in our expression of queer identity, in a way not available to people of pre-1600 Europe. In this way we are able to pursue study and re-creation of this time and setting, while being more inclusive and compassionate than our period of study. Blue feathers were added by the entrant as a nod to the SCA symbolism of Blue Feathers with LGBTQ identity.

My main inspiration for this gown came from an image of a middle class Swiss woman, sometimes identified as a Trossfrau or prostitute, whose red dress features a split skirt with one side made up entirely of brightly colored contrasting bands. This detail, shown at left, is from a large Totentanz mural found in Bern, Switzerland, originally painted by Niklaus Manuel Deutsch circa 1516-1519. Like the source image, my gown features a base color of red, a front-laced bodice, and a pleated skirt with contrasting multicolor bands on the (wearer’s) right side.

My secondary inspiration came from the gown of a midwife pictured in Geburt Mariens’ Birth of Mary, circa 1515-1525. As seen at right, this gown features a rounded, wide neckline, and no sleeves (presumably because the midwife is working, and has removed any sleeve that might otherwise be worn). As my gown is similarly intended to be everyday wear for a lower class woman, and therefore functional for working in, I did not include sleeves.

The bodice is constructed of three layers; the same red linen is used for the outer layer and the interior lining, with canvas between to give additional structure and bust support. The seams were done with a modern machine running stitch, as chronic illness prevents me from sewing garments entirely by hand. All visible stitching on the interior lining is handsewn. A thick hemp cord was used along the front opening of the bodice to stiffen the edge and prevent puckering in the linen when the bodice is laced tightly. 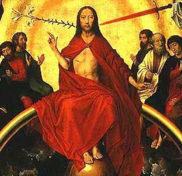 The skirt is pleated to the bodice using knife pleats, and was machine seamed and hemmed. Its multicolored bands represent a rainbow. Rainbows were used commonly in medieval and Renaissance art as a Christian symbol, associated with God’s covenant, including frequent use of the rainbow as a seat in depictions of Christ. See image at left, a detail from The Last Judgement (Hans Memling, German, c.1467-71) showing Christ seated atop a red-orange-yellow-green-blue-violet banded arch. While the modern association of the rainbow with Gay Pride (which is my explicit intent) is decidedly post period, due to prevalence of the rainbow in period art, I believe this combination of colors to be in no way disruptive or jarring to a period aesthetic. 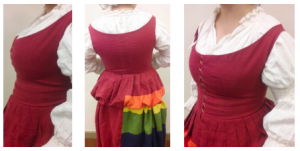 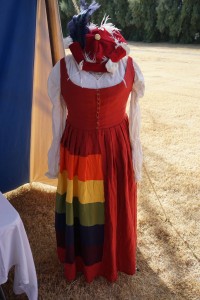 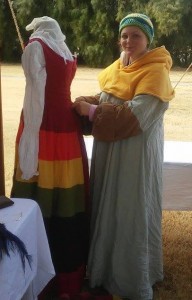