My 15th C ‘Florentine’ gown was created for Gyldenholt/Calafia Friendship Tourney 2015, which was themed around the Palio di Siena. I competed in several different contests as a member of the Contrada di Valdimontone, including entering this gown into the costume competition.

While I was not named winner of the costume contest, my Contrada was the overall winner for the event! Below is presented my documentation as it appeared that day.

I also entered this gown in the 2015 Dreiburgen Arts & Sciences Champion competition, as one of three entries across three different art forms.

Visit my ‘Florentine’ board on Pinterest to explore some of my research and inspiration!

My costume consists of a late 15th C gamurra in the Florentine style, with fitted sleeves, worn over a fitted camisa. The gamurra is constructed from a synthetic faux silk, as the cost of real silk is prohibitive for me. I chose a striped pattern in the colors of my Contrada – red & gold for Valdimontone, with white accents in the visible portions of the camisa. Two examples of gowns similarly featuring bold, color contrasting stripes can be found in 1490s France; see figures at left and right. The bodice of the gamurra is lined with crimson cotton, and the camisa beneath is a textured white cotton.

The bodice consists of two pieces, back and front, seamed at the shoulder and lacing at each side. While less common than front-lacing, I find that this style is more flattering to my figure and better showcases the pattern of my fabric by giving an uninterrupted expanse of stripes.

The camisa is not as voluminous as some worn in this period, as I did not desire bulk under my fitted sleeves. The neckline is gathered on to a band, and the sleeves are set in at shoulders and fitted tightly, allowing more range of movement and comfort when I perform (flag spinning). 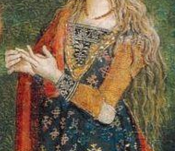 For my sleeves, I chose a style that was fitted and open only at the elbow and underarm, to maximize my mobility and range of motion as I am also performing in the day’s flag-throwing competition. It is sewn to the bodice at the shoulder and lined in cotton.

For styling, I have loosely based my coiffure on that worn by Venus in the image at left. A similar style is shown at right: a central part pulled back into an elaborate chignon, loose curls falling from temples, and long waves left flowing down the back.

Click on any thumbnail in the gallery below to see full image: 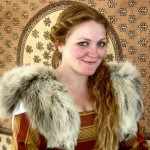 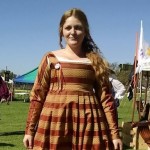 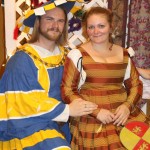 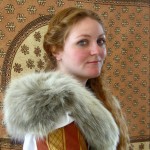 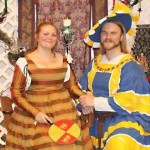 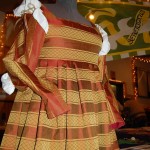 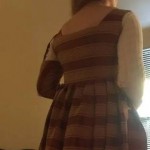 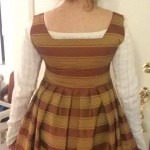 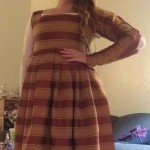 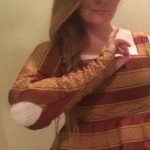 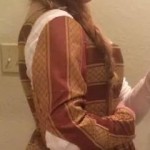 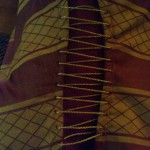 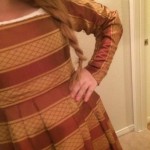 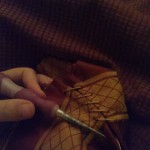